In recognition of Fibroid Awareness Month, I am presenting my technique for safe in-bag morcellation and contained power morcellation through a 12 mm trocar site.

Fibroids cause an estimated 34-billion-dollar annual economic impact in the United States1. Half of that sum is from lost productivity. Minimally invasive gynecologic surgery (MIGS) changes the bottom line on both sides of the equation.

Central to cost effective fibroid surgery is power morcellation (PM) to avoid larger incisions and associated morbidity. PMs allow surgeons to use small incisions for removal of very large uteri. As minimally invasive surgeons, we need to remember that the Food and Drug Administration (FDA) did not ban PMs, they issued stringent guidelines for patient selection, and recommended containment of the specimen during morcellation.

The interesting point to the FDA guideline, is that is was not based upon the best available evidence. The Agency for Healthcare Research and Quality (AHRQ) is one of twelve agencies within the United States Department of Health and Human Services (DHHS). Their extensive meta-analysis and systematic review of the data did not corroborate the FDA’s theories.

Unfortunately, many hospital systems still ban PM use. However, after release of the AHRQ report2 my hospital system re-evaluated its PM policy and its use is again permitted with contained morcellation.

Thanks to AAGL, I was already aware of contained morcellation techniques. Now, I perform MIGS with contained PM. We use these devices at our discretion and take care to fully inform our patients of the risks associated with in-bag morcellation of fibroids.

The bag I utilize was designed to be placed through a 2.5 cm umbilical incision, but I use a suprapubic (SP) port for the bag. I typically place my ports in a diamond configuration on the anterior abdominal wall for myomectomy procedures. I insert four ports; the umbilical and lateral ports that are 5 mm in size, and the midline SP that is 12 mm in size.

While watching through a side port, I insert the morcellation bag through the SP site, but only use the bag, not any associated components of the “kit.” I do this by pushing  the tube-like plunger to deliver the device into the abdominal cavity.

At this point a ring springs open for tissue insertion. For hysterectomy of large uteri, I will drag the ring beneath and over the uterus before separating it from the cervix, the removal of which is completed at a later time.

I exteriorize as much of the bag as possible before insufflation. To avoid bag perforation, the trocar is guided into the bag until the sheath is just under the skin. The obturator is removed, the bag insufflated at this port site to create a working space about the specimen, and then the obturator is replaced for full insertion of the trocar.

The telescope is transferred to the SP site to assist the umbilical trocar insertion into the bag, then returned to the umbilical site. The PM is introduced and used to remove the uterus or fibroid until only small particles remain.

Pulling or re-adjusting the bag can pull it free from the umbilical trocar and should be avoided. At the end of the procedure, suction deflates the bag for removal.

Hospital systems have OB/GYN policy committees. Ask for a review by your peers in light of the AHRQ report2. If I can help, contact me through AAGL Connect.

Dr. Moore is Chair of the AAGL Fibroids SIG and President of the Denver Medical Society in Greenwood Village, Colorado. 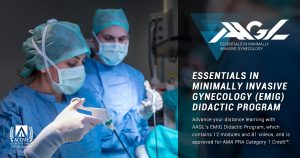