This month we are spotlighting Oncology and articles from the Oncology Special Interest Group led by Edward Tanner, MD, MBA, Chair and Fernando Heredia, MD, Vice-Chair. SurgeryU features hundreds of high-definition surgical videos from surgeons from around the world. Access to SurgeryU is one of the many benefits included in your AAGL membership. If you would like access to these videos, CME programming, JMIG Journal, and member-only discounts on meetings, join AAGL today. These videos are being made available with public access for a limited time. Click here to join AAGL!

The goal of upfront surgery for advanced ovarian cancer is to achieve maximal cytroreduction, based on multiple studies consistently correlating improved survival outcomes with minimal or no gross residual disease. Patients with advanced disease who are not deemed to be candidates for a primary optimal or complete cytoreduction, may undergo neo-adjuvant chemotherapy (NACT) to decrease the disease burden. Data from randomized trials demonstrate that oncologic outcomes are similar between patients undergoing NACT followed by interval debulking surgery (IDS) and those who undergo primary debulking (PDS) followed by adjuvant chemotherapy. There tend to be fewer instances of operative morbidity for patients undergoing IDS, since they often require less radical surgery to achieve a complete cytoreduction1,2.

The decreased need for more radical surgery in the IDS group is related to the significant and sometimes complete pathologic response these patients experience following NACT. Minimally invasive surgery (MIS) has been advocated as a feasible and effective technique for IDS following NACT3. Consequently, there is a growing interest in the role of MIS for IDS in well-selected patients. Results from the Phase 3 LANCE trial, which should help better answer this question in a prospectively randomized patient population, are eagerly awaited.

Critics of the MIS approach for IDS base their skepticism on the potential presence of macroscopic disease located in areas not easily visible via MIS or identified during pre-operative imaging. Proponents of MIS, argue that a careful and extensive inspection of the abdominal cavity may still be performed laparoscopically, and potentially enhanced with the use of a hand assistance port. Imaging drugs to help identify ovarian cancer lesions may also help. In November 2021, the Food & Drug Administration (FDA) approved pafolacianine specifically for this purpose, but only during open cytoreduction.

Pafolacianine binds the folate receptor (FR) overexpressed in ovarian cancer cells. The drug is internalized and accumulates in FR-positive cancer tissue, which then illuminates under near-infrared fluorescent (NIR) light. The safety and effectiveness of pafolacianine was evaluated in a randomized, open-label trial of women undergoing surgery for ovarian cancer. Of the 134 women who were evaluated under both normal and fluorescent light during surgery, 27% had at least one malignant lesion detected that was not observed by standard visual or tactile inspection4. Therefore, pending findings from the LANCE trial confirming feasibility of MIS for IDS, pafolacianine may further enhance our ability to detect and remove residual disease during minimally invasive interval cytoreductions in well-selected patients.

Drs. Roque, Menderes, Heredia (SIG Vice Chair), and Tanner (SIG Chair) are members of the AAGL SIG Board. Dr. Roque and Dr. Tanner are physicians at Northwestern University Feinberg School of Medicine in Chicago, Illinois. Dr. Menderes is a physician at Yale University School of Medicine in New Haven, Connecticut and Dr. Heredia is a physician at Universidad de Concepción in Concepción, Chile.

A 43-year-old female with past medical history of class III obesity presented to clinic after being diagnosed with a 40 cm pelvic mass. A CT of the abdomen/pelvis demonstrated a massive multi-locular cystic mass, with some solid components, arising from the right ovary (Figure 1). There was no evidence of ascites, omental caking or peritoneal carcinomatosis. Her CA-125 was elevated at 229.

Because of the complex nature of the lesion and the elevated CA-125, an exploratory laparotomy was considered. However, because of the predominantly cystic nature of the mass, and lack of other imaging findings concerning for distant metastatic disease, a minimally invasive surgical (MIS) approach was also considered. After extensive counseling, the patient opted for an MIS approach and underwent a robotic assisted total laparoscopic hysterectomy, bilateral salpingo-oophorectomy, omentectomy, lysis of adhesions, and mini-laparotomy for controlled drainage and excision of the pelvic mass.

During the case, a 6 cm vertical midline incision was made below the umbilicus. A gallbladder trocar was used to puncture and drain the largest cystic components of the mass in a controlled fashion. A total of 33 liters of sero-mucinous fluid were removed. A GelPoint port was then used to achieve pneumoperitoneum and the case completed with robotic assistance. Intra-operative frozen section of the pelvic mass demonstrated at least a borderline mucinous tumor. Therefore, a hysterectomy, left salpingo-oophorectomy, omentectomy and peritoneal biopsies were subsequently performed. The patient had an uncomplicated post-operative course and was discharged home two days after surgery. Final pathology demonstrated a Stage IC2 mucinous ovarian carcinoma based on a surface implant.

The decision to proceed with MIS was favored because of the patient’s BMI and overall poor performance status. The concern for upstaging as a result of surgical spillage was highlighted during the patient’s pre-operative counseling. Although this risk can oftentimes be minimized with an open approach, it was unclear whether laparotomy would greatly reduce rupture in the setting of a thin-walled cystic mass of this size.

Retrospective data from 15,000 women with Stage IA-IC1 ovarian cancer, calculated a risk for surgical spillage of approximately 32% for mucinous tumors and 57% for clear cell tumors. The same study demonstrated that in the patients with intra-operative capsule rupture, after adjusting for factors including age, performance of surgical staging, and administration of adjuvant chemotherapy, only clear cell histology exhibited a negative effect on cause-specific survival (adjusted HR 1.99, 95% CI 1.45–2.75). All other histologies had statistically equivalent outcomes1.

This case highlights some of the nuanced considerations providers face when selecting the best surgical approach for removal of large ovarian masses. An open approach should be the standard for managing large cysts suspicious for malignancy to avoid surgical spillage that may result in compromised oncologic outcomes. However, given the high risks of surgical spillage even with open surgery in extraordinarily large masses, the benefits of a minimally invasive approach can potentially offset these risks. Drs. Roque, Menderes, Heredia (SIG Vice Chair), and Tanner (SIG Chair) are members of the AAGL SIG Board. Dr. Roque and Dr. Tanner are physicians at Northwestern University Feinberg School of Medicine in Chicago, Illinois. Dr. Menderes is a physician at Yale University School of Medicine in New Haven, Connecticut and Dr. Heredia is a physician at Universidad de Concepción in Concepción, Chile.

The Oncology SIG chose this surgical video to demonstrate a step-by-step robotic lymph node resection off of the aortic bifurcation (Canadian Task Force classification III) in a patient with presumed ovarian cancer recurrence. Robotic secondary debulking of recurrent ovarian cancer is feasible and should be considered in selected patients without carcinomatosis and ascites. 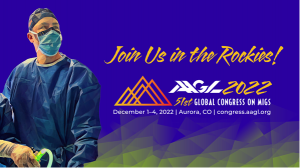 Grab a Gala Ticket at AAGL22! 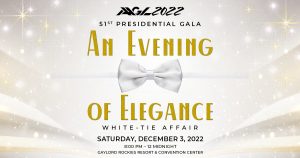